Here’s a recap of my fall 2021 SOBO thru-hike of the AZT with Oliver aka “Bowie”. This post will cover from the Northern Terminus to Roosevelt Lake. I’ll put up another post covering the rest of the trail soon! I hope you find this useful if you’re considering a hike on the AZT, or just want to get a sense of the trail. Please reach out if you have questions. I’m @seltzerskelter on Instagram and I love talking trail with folks! It’s important to remember the Arizona Trail crosses the ancestral lands of many indigenous peoples, and I encourage you to visit the AZT’s history page as a starting point for relevant info.

Setting off from the monument at the Northern Terminus, the Arizona Trail immediately ascends a mountain heavily scarred by fire damage. Given the AZT’s reputation as an arid trail, imagine my surprise when ten minutes into our hike rain began pelting down. Twenty minutes into the hike the trail had turned into a full on river. Lightning struck within close range so Oliver and I huddled underneath a low rocky overhang until the lightning moved away. The torrential rain and flooding continued the next three hours until nearly dusk, just in time for us to collapse into our tents. 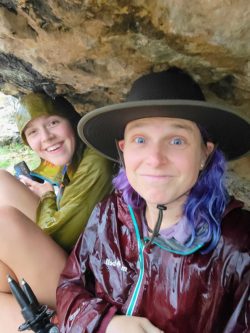 After that rough start we began to find our rhythm. The cold weather and low pine forests a reminder that Arizona is much more than red sand and ancient canyons. This section crosses the Kaibab Plateau, which cruises around 7,000 feet of elevation, but you wouldn’t know it most of the time considering the flatness of the trail. 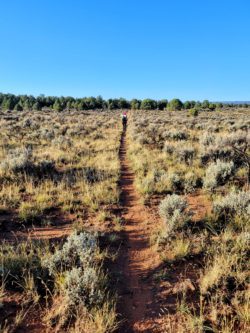 Flatness on the Kaibab Plateau

The plateau was at times filled with golden aspens, giving everything a glowing, magical feeling. 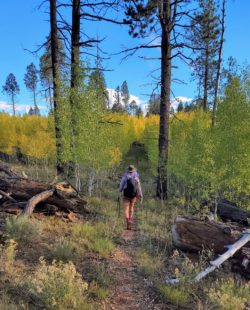 Fire damage played a sporadic role as we passed through burnt sections on the Kaibab Plateau and again occasionally throughout the entirety of the trail. Campsites were primarily stealth spots, which were easy to come by on the plateau. We only ran into other thru-hikers for the first time on day 3… a far cry from the crowded early days on the Appalachian Trail. Shortly after we encountered our first trail magic, homemade tacos and tea from the Uprooted Soap Company, a couple of adventurers who love supporting folks in the outdoor community from the comfort of their blue bus! 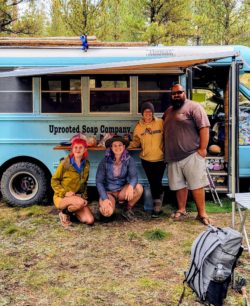 The trail angels from the @uprootedsoapcompany

North Rim into the Grand Canyon

Reaching the North Rim of the Grand Canyon was our first major milestone. We were looking forward to switching up the terrain, and to warmer weather in the canyon after continuous cold nights. The North Rim is astounding in it’s own rite, even though it’s not generally one of the first views you’d see on a postcard. We camped at the campground where thru-hikers are given walk-in sites, which incredibly are some of the best in the whole campground. Oliver and I had a site directly on the rim, which although windy, was an unforgettable spot. 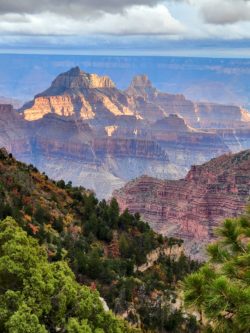 View from the North Rim Campground

The next morning we descended into the canyon, excusing ourselves as we passed the droves of day hikers and dodging puddles of pack mule urine. Despite the crowds, the sun first trickling, then then pouring into the canyon was enough to make me stop to admire around every bend. The deeper into the canyon we got, the more alive the world became. Outer shells came off as the sun warmed the rocks. 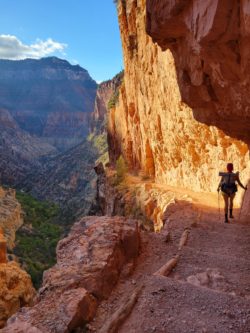 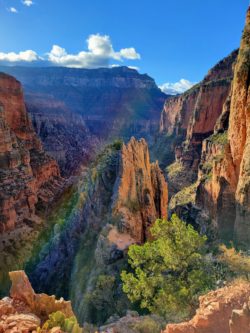 Rainbow in the foreground as morning sunlight flooded down the canyon walls.

As the initial ascent ended, we began crossing the canyon. We took a small bushwhacking detour to get to Ribbon Falls, where we availed ourselves of the incredibly rare fresh running water to take a much needed bath, do “trail laundry” and take in the sun’s rays in relative warmth for the first time on the AZT. 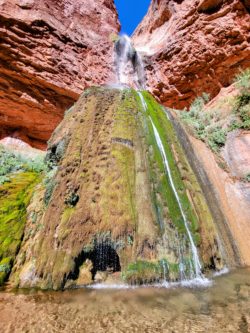 We camped that night at Bright Angel Campground with other thru-hikers. It was nice having a sense of camaraderie with other hikers after primarily being by ourselves prior to the canyon. That night we caught a glimpse of the elusive ring tail cat, lemur-like in appearance with a bushy tail ringed like a raccoon, unfortunately I didn’t get a picture.

The next day we crossed over the muddy Colorado River and ascended over 4,000 feet to the south rim. This hike was well-graded so while it was challenging, you mostly just had to put one foot in front of the other and stop to enjoy the view, there were no technical sections. 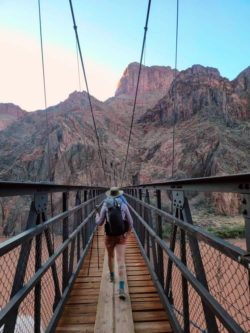 Crossing over the Colorado River 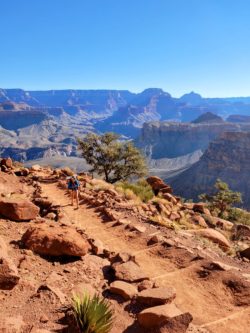 On the ascent to the South Rim 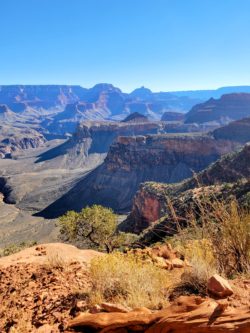 Once we got to the South Rim, we met up with our friend from the AT “Party Dave” who works for NPS at the South Rim. He gave us a much needed place to crash and we spent the day doing chores and gorging on way overpriced pizza (resupplies were OUTRAGEOUS in the South Rim/Tusayan area, consider sending a resupply box here).

When we made it to the Grandview Firetower we made camp for the night and fell asleep to a strong rain and thunderstorms. A few hours later I was awoken by the tent drooping under the weight of snow so much so that it teabagged my face. We spent the rest of the night waking up hourly to push the snow off the tent. The next morning we steeled ourselves and put on every piece of clothing we had to hike out to a road in the blustery storm. Thankfully we quickly caught a hitch once we made it to the highway and made our way to Tusayan to dry off and rest at a hotel as the storm continued throughout the day. 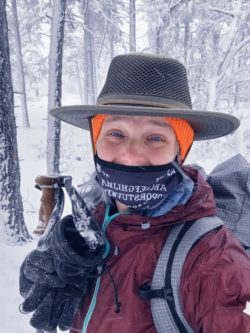 Wearing every piece of clothing I had after a rude awakening at Grandview Firetower. 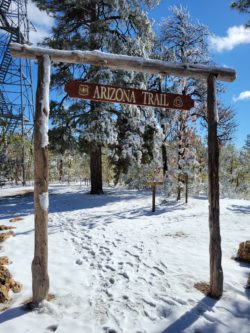 After leaving Tusayan we had one slow, sloppy day in the snow before things cleared up. We booked it across Babbitt Ranch, a series of privately owned ranches that had the nicest water tank I saw on trail. 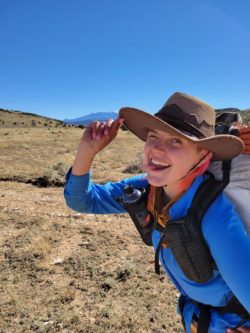 Save a horse, ride a cowboi. 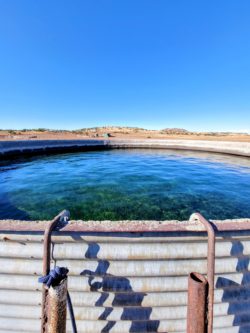 Looming in the distance for the better part of three days was Mount Humphreys AKA the Arizona Snowbowl. It’s a strange feeling to walk straight towards something you can see in the distance for three days, while never seeming to make progress as we meandered through endless fields, befriending all the tarantulas and cows along the way. 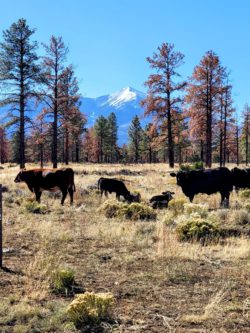 Moo moos with Mt. Humphreys forever in the background

Humphreys itself was a treat, with a ski lodge restaurant in operation on the mountain where we scarfed down burgers. Being from New England, I was cracking up seeing tourists laying down in dirty snow piles near the road for full on photoshoots, the sight of snow was truly novel to them, but to me they looked like they had lost their marbles.

We had our minds set on making it to Flagstaff ASAP though so we busted ass to get into town the next day. Flagstaff is a fantastic small city, we loved the vibe and spent the day doing errands, checking out cute shops and lounging at a cafe. We capped the day off with a “Eat an Entire Box of Cereal Challenge”, which isn’t that hard, but definitely made my stomach hurt afterwards. 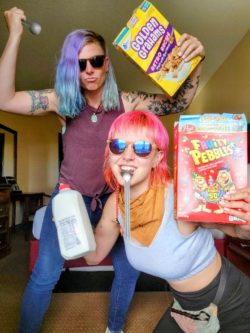 This section was more of the same we’d grown accustomed to. Lots of horses and cows, scrub trees and cold nights. By this point the flatness was less of a gift and more of a curse, and the cow pond water wasn’t even funny to laugh at how gross it was anymore, it was just gross. At one cow pond, a hunter who had a hunting camera pointed at the water source told us that the pond was “about half elk urine”… We were ready for the mountains. Reaching the Mogollon Rim, we felt worn down and wrung out, but the descent down the rim was lifegiving. We could feel the temperature slowly rise the lower we went and the scenery morphed into something closer to resembling a desert ecosystem than we’d seen on trail so far. 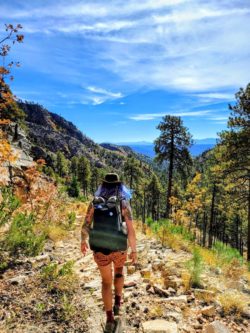 Descending from the Mogollon Rim 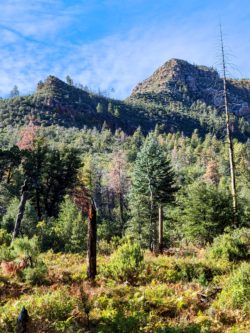 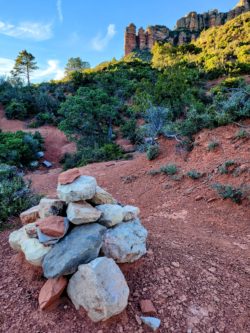 Payson was a quick stop off for a resupply, shower and laundry. The main attraction in Payson is a take out joint called “By The Bucket” where they sell spaghetti and meatballs by the bucket. It’s SO worth it. If you hike the AZT do yourself a favor and stop here. 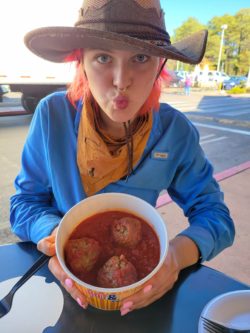 Sketti and meatballs from “By The Bucket” in Payson

From here, the mountains began in earnest. The Mazatzal Wilderness was notably covered in fruiting prickly pear cacti and beefy agaves. 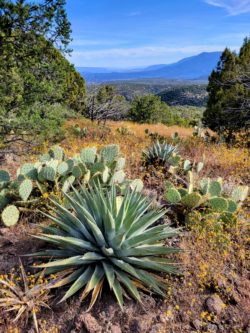 The weather warmed during the day and we welcomed the vitamin D when we were able to take off our puffys during the afternoons. Water came from a mix of cow ponds and metallic troughs. 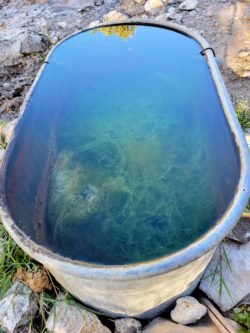 This trough full with clean cool water was such a morale boost.

The day we ran into the East Verde River was notable because it was the first river we had seen since the Colorado River in the Grand Canyon, but even more so because of the family of javelinas we came upon in the surrounding riparian area. The adults kept a close eye on us, but ultimately went about their business once they ascertained we weren’t a threat to them or their young they kept shielded in the brush except for one brief “stampede” across the trail. 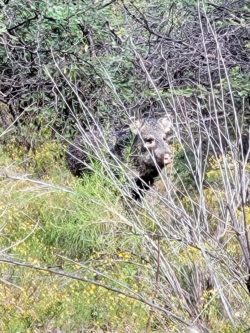 One day we came upon an abandoned mine shaft, I poked my head in, saw some rubble and about a million fat black flies and “noped” out of there. Oliver, forever the braver of us, went in and snooped around, finding an old cot and some scrap metal before returning to the mouth of the shaft with black flies in tow. 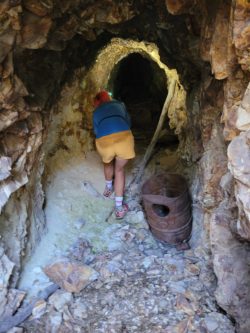 Then, having officially passed the halfway mark, Oliver’s family picked us up and treated us to a zero day in Tempe! The recharge was much needed and we indulged in food you don’t often find in trail towns. Oliver convinced me to try Takoyaki… it’s not my thing.

The Four Peaks themselves are beautiful. There section had lots of stunning mountainous desert vistas, but they brought constant exposure and a lack of water. Therefore, finding shaded and protected places to take breaks was important and each water source acted as the focal point for the day. 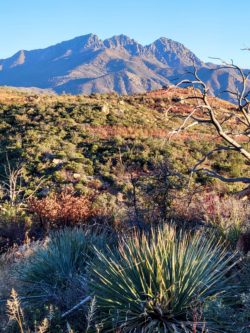 We came across our first teddy bear chollas and saguaros on trail. Saguaros are so stately and dignified looking to me for some reason. They’re the skyscrapers of the desert, housing untold amounts of birds and bugs. 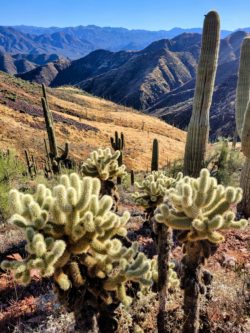 The descent toward Roosevelt Lake was stunning, our eyes barely knowing how to comprehend such a large body or water. I would have written it off as a mirage if I hadn’t checked Far Out that day. The Roosevelt Lake Marina is an oasis in more ways than one. We ate food in the restaurant, replenished our snack stashes and enjoyed the Milky Way spilled out above us. 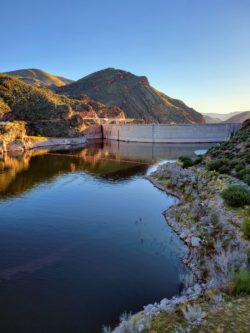 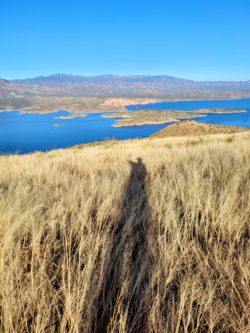 Roosevelt Lake from a couple miles out.